Never Let Your Guard Down 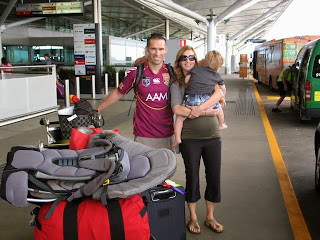 As I sit in the Auckland airport en route to Vancouver, I reflect on how much I learned at Maroochydore.

Prior to arriving at Maroochydore, I believed myself to be a strong educator with skills that could transcend continents and cultures. I was wrong. The exchange experience taught me that the skills of a teacher are a result of their environment. When the environment changes, it becomes apparent that new skills are required. At Maroochydore I had to learn how to manage behavior in an environment that I considered unrealistic at home. Even the Maroochydore teachers consider some of the classes impossible to manage. There have been times that I felt I was doing a great disservice to the school because I was unable to keep my students on task, and therefore, I did not maximize their learning potential. Indeed, some students may have learned absolutely nothing in the time that I have been their teacher. I had to acquire the strategies from my colleagues in order to survive, and fortunately, I did learn a great deal from them. I must make the important qualification that in my time here I was only able to glean a small amount of their expertise. I certainly cannot claim to have the tiniest fraction of their skill in motivating a student body that for the most part did not value education. These teachers possess trade knowledge of teaching that merits significant admiration.

One idea that stood out throughout this experience is something my curriculum studies professor, Terry Carson, had already taught me, but the importance had not sunk in until I was well into the exchange.
Beware of binary thinking.
Obi-Wan Kenobi, the Jedi master who trained Darth Vader said it best, “only a Sith deals in absolutes”. only Sith
Both systems – Queensland Education and Edmonton Public Schools – deal in absolutes regularly. Many of the things we do at EPSB would break Queensland Education policies and vice versa. I have had the opportunity to experiment with ways to motivate students that would make some of my EPSB colleagues shudder. I used assessment as a motivator… and it worked extremely well. My thoughts on assessment have changed since I have been here at Maroochydore. It’s not that I disagree with the policies of either system, rather, I no longer believe that one particular way of doing things is necessarily all perfect or all evil. All strategies have trade offs.

I most likely learned more from my students than the reverse. One particularly unforgettable lesson happened during grade 11 Chemistry when the students were working on stoichiometry problems. A student, Kyla,  said to her elbow partner “never let your guard down”.  She was referring to a homework question where I put an unbalanced chemical equation down and expected them to recognize that it needed to be balanced before proceeding on. One student was quite frustrated that he had to redo his work. I had a good laugh because, at Maroochydore, the advice to always be on guard is extremely relevant to teachers as well. In fact, when that class was nearly over (last period on a Friday), I had the students put their chairs on the tables and I waited by the door for the bell to ring. I had my hand on the door handle to stop students from leaving early. One student convincingly said that she heard the bell ring. I let go of the door handle momentarily to check the time and she immediately opened the door and ran out of the room. “See? You let your guard down. Never do that” said Kyla as she walked out of the room with the rest of the class. Seconds later, the bell rang.

The most important lesson that I learned here – or at least began to learn – is that work does not equal life. The sadness Heather and I feel as we say goodbye to friends we have made, makes it apparent that the work was nowhere near as important as the friendships. As I speak with others who have done the Australian exchange, I realize that they learned to focus on positive aspects of the experience rather than the classroom.  Near the end of term 3 I believe that I was getting much better at that but still had a long way to go.

We will miss the travel, the weather, the beach, and most of all, the amazing people we connected with and will remain friends forever with. You know who you are.

Cheers.
Posted by Australia Bound at 08:16 No comments:

In the Family Way

For the past six weeks we have been blessed with chaos and care from some of our loved ones as Heather’s parents, Wayne and Anne; sister Carla and two nephews, Tyler and Ryan came to visit us from Manitoba, Canada. We celebrated Fenton's 2nd birthday and took in many adventures as we tried to make the most of their short time down under. We travelled to Fraser Island, the world's largest sand dune; to Rainbow Beach where we sand tobogganed and vainly attempted to collect all the different colours of sand; and to Tin Can Bay where we fed the humpback dolphins. We went to the Australia Zoo and Underwater World and ofcourse we hit a beach or two! Here are a few pictures to evidence what we got up to. We sure miss them. 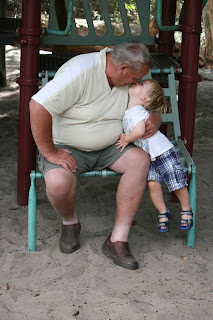 Posted by Australia Bound at 03:37 No comments:


The unfortunate thing about blogging is that life can get in the way of sitting down and getting it done. As a result, this blog is embarrassingly late.
I believe that we left off in Hughendon stumbling home from a beer filled night watching rugby. Let’s fast forward through all of the driving and get to the good parts. There is an intersection near a town called Tennant Creek where we stayed the night at a rather ordinary campground. From here, the high way goes north to Darwin or south to Adelaide. In town, the alcohol infused violence that plagues the area was evident by all of the shouting. It reminded me a bit of what it was like to live in Old Strathcona during the Oilers Stanley Cup playoffs. We made sure to stay in our campground at night rather than venture too far. Early the next morning, we took off north to Katherine to visit the famous gorge.
The town of Katherine is a rather typical town of the North Territory with the exception of the tourists. There is luckily a gas station. We were at a half tank when we passed a road house about half way from Tennant Creek to Katherine, and we decided to continue on and fill up in a town called Larimah. The unfortunate thing about that was that the gas station in Larimah had burned down. The tank reached empty 20km out of Katherine, but the fumes were enough to get us there. Lesson learned… Never leave a place with half a tank if you can avoid it.
When we arrived we went straight to an overpriced campsite. Fireworks went off that night for Territory Day. We enjoyed them very much because Territory Day is June 1 – the same date as Canada Day! 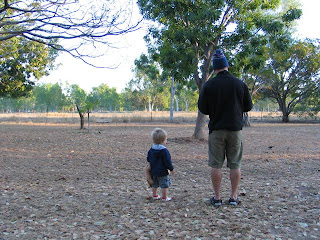 We went to see the Katherine Gorge the next morning. It was much too hot to get out and walk around during the daytime, so carrying Fenton around was best done in the early morning. After a long hot hike through a boulder path with bleeding eucalyptus trees and the odd boab, we finally arrived at the Gorge. There is a very nice park near the gorge where many locals and tourists sit, relax in the shade, and have picnics. We wondered if a crocodile would show up at any time to cash in on someone’s sausages. As we walked through the park, a brown snake dropped from a tree overhead and Greg unknowingly stepped within a foot of it as it slithered away. Brown snakes are one of the most venomous species in the world. We also had the fortune to see large fruit bats and a wallaby on this walk. 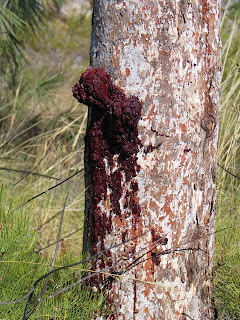 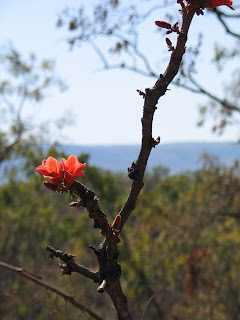 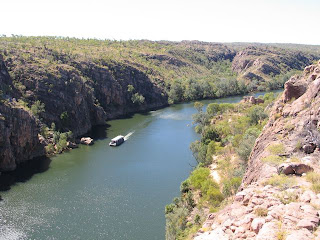 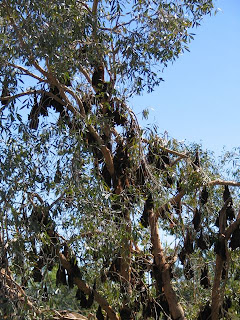 That afternoon we continued north to Pine Creek. The campsites there were very dirty and Greg decided to look into the Pine Creek Resort just in case the rooms were affordable. For $110 a night, we stayed in an air conditioned room with a shower. The rooms were very nicely refurbished from old rail yard cars. It was our oasis. Even Fenton was joining in on the high fives!

At Pine Creek, one can go east to Kakadu or west to Lichfield. We chose the former. We drove early the next morning into the park, enjoying the small hikes along the way, but most of all, the rock art.
The art on the rock dates back hundreds, and sometimes thousands of years. Most of the art was for the purpose of story telling and education. There were many lessons about mythical beings such as Nabulwinjbulwin, an evil spirit who eats females after hitting them with a yam. The paintings of animals, showing the important parts to eat were essential for teaching survival skills. When walking through these areas, it was easy to imagine how it was ideal for groups to congregate in the shade to enjoy the picture show. In Jabiru we climbed to the top of the same escarpment that Crocodile Dundee stood when he was showing the reporter where the crocodile had nabbed him. The scenery is breathtaking to say the least. 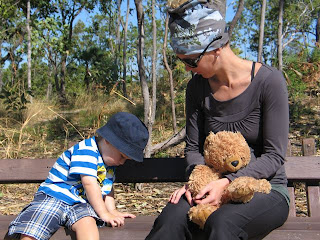 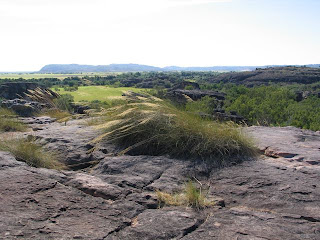 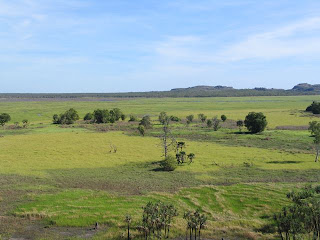 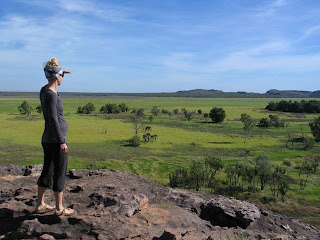 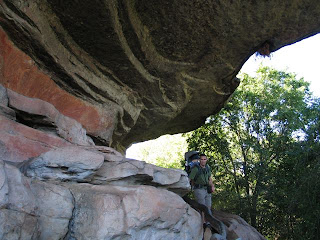 It was only a short drive to Darwin where we took a rather short tour of the city. It was so hot during the day that it was extremely difficult to walk for a very long time without feeling overwhelmed. And this is winter… It was amazing to see the locals walking around with sweaters and touques on!
Our final journey was a trip south again to take a day tour through Lichfield National Park. This park has far more tourism due to the beautiful waterfalls and swimming holes. The signs indicate clearly that the rangers have made every effort to make sure that there are no salt water crocodiles, but the “freshies” occupy the area. Apparently, fresh water crocodiles don’t bite… often. 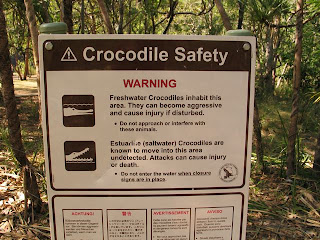 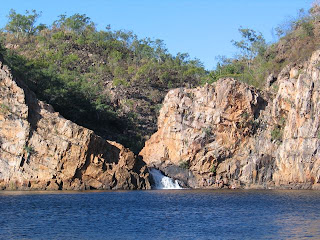 Speaking of crocodiles, we made our way to Crocadilus Park, a zoo that has a big crocodile habitat. We watched the reptiles feed and even held a baby croc! 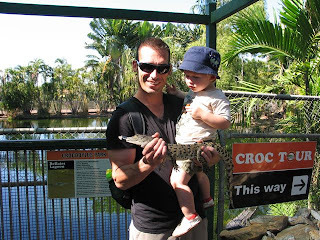 Since we have returned home from Darwin there has been one more trip. We did take a weekend to see Alice Springs, King’s Canyon, The Olgas, and Uluru (also known as Ayers Rock). We were so lucky to share that trip with friends Chad, Nicole, and Alex from Edmonton. During this trip we saw the School of Air, a public distance education school that educates children all over the outback, rode camels, nearly hit a camel on the highway, and experienced a sunrise at Uluru. Amazing! 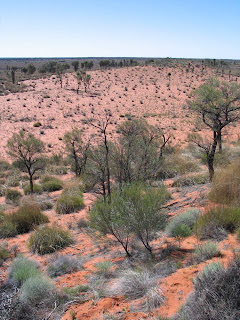 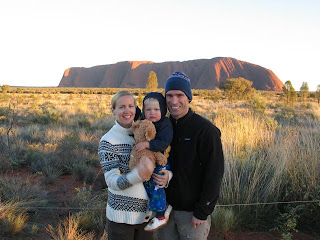 There are 7 weeks left before we fly from Brisbane to Edmonton. Our feelings are mixed about the impending return. In some ways we are happy to see our home again, yet there is so much here that will be missed. As I sit here typing away outside, enjoying the balmy 20C day, sipping on an apple cider, I remind myself that winter in Edmonton will be much different.
Posted by Australia Bound at 20:08 No comments: